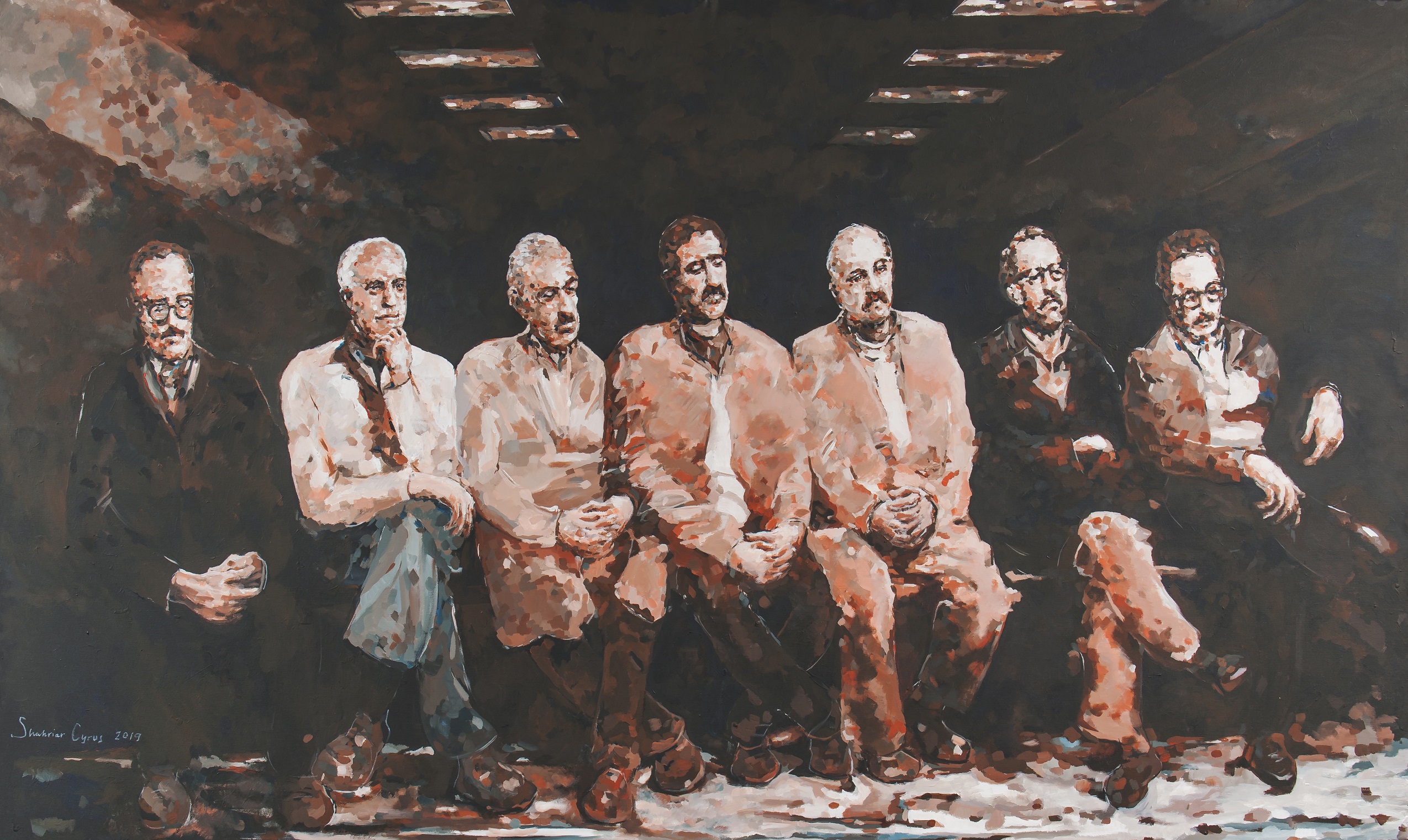 The Twenty-Fifth of December 1981 by Shahriar Cyrus
A portrait of seven of the eight Bahá’ís who were executed without trial in Iran.

MM: I spoke with Shahriar Cyrus this past April about his painting of the seven members of the mahfil who were executed without trial in the Islamic Republic of Iran in 1981: Mr. Mehdi Amin-Amin, Mr. Jalal Azizi, Dr. Ezzatollah Forouhi, Dr. Mahmoud Majzoub, Dr. Sirous Rowshani, Dr. Ghodratollah Rowhani, and Mr. Kamran Samimi. An eighth member of the mahfil, Mrs. Jinous Mahmoudi was also executed. Because there was no photograph available to Shahriar, he did not feel he could accurately portray her as she looked at the time, so he did not include her in the painting.

MM: What inspired you to create this painting?

SC: I created this painting in March 2019 for a group exhibition — “Art, Minorities and Social Change in Iran” — held by Touch Art Gallery in collaboration with the Center for Middle Eastern Studies at Harvard University. They asked me to create this painting along the lines of their mission, so I decided to paint a portrait of the members of the governing Iranian National Spiritual Assembly, the mahfil, when they appeared in court. The painting is 120 x 200 cm, and I used a limited color palette in making it. It took me about a month to paint this work, which was exhibited at Harvard University from May through August 2019.

Several years ago, I dreamed that my aunt’s husband, who is fourth from the right in the painting, was at a gathering and sitting next to the Imam Hossein. I was there too, and when the Imam Hossein saw me, he said to me: “You are a painter, so paint us.” In other words, the Imam Hossein ordered me to create this work.

I was twelve years old when the members of the mahfil were sentenced and executed. At that time and age, I thought my aunt’s husband, who was born in 1313 AH (1934 or 1935 AD), was very old. A documentary called Revolutionary Justice in Iran was made about the execution of the mahfil, which I saw after I myself had endured two months in solitary confinement in an Iranian prison. I was forty-seven years old at the time, almost the same age as my aunt’s husband in the film, and the events of the film made a deep impression on me.

Three paintings inspired me to create this work of art. One of them was The Last Supper by Leonardo da Vinci, which touches on a theme similar to the one I explored in my painting of the mahfil. The members of the mahfil said goodbye to their families for the last time on the day of their deaths. I was influenced, too, by The Martyrdom of Saint Sebastian by Titian, a Venetian artist of the early sixteenth century. In this painting, what is essential to me is the face of Saint Sebastian, who seems not to feel the pain of being wounded. The last painting that influenced me is a work called The Third of May 1808, which was painted by Francisco Goya and shows Napoleon’s army. This painting inspired me to use some of the techniques I employed in the painting. I gave my painting the following title: The Twenty-Fifth of December 1981.

MM: What does this particular painting mean to you?

SC: One of my friends was given the responsibility of taking this painting to America and showing it to the family members of the victims who lived there. When Mrs. Majzoub, the wife of one of the executed members of the mahfil, Mahmoud Majzoub, saw this painting, she thanked me and said that after forty years, Mahmoud had returned home.

I believe this painting was a turning point in my career. I believe that the spiritual value of this painting is so great that, to a large extent, creating it enabled me to complete my mission as a painter. I spent a whole month in my studio on this painting alone. During the creation of this work, I continually played the audio recording of the court proceedings. I worked in what was a heavy and emotional atmosphere. In this painting, I tried to portray the feelings that each of these members was experiencing at that moment.

Among the members of the mahfil was a woman named Jinous Mahmoudi, who was also executed and on the same day as the rest of the members. Because of the misogynistic system of the Islamic Republic of Iran, she was not included in the film I saw about the court proceedings. Before creating this work, I studied photos of the members of mahfil, and when I compared those photos with the pictures taken in court, I saw significant differences. The courage that was on their faces when they were in court made each face come alive in powerful and unique ways. In order not to inaccurately portray the face of Jinous Mahmoudi, and also because I did not have information about her condition at that time, I was not able to paint her. This painting was installed on top of Hajar al-Zawiyah in the Bahá’í House of Worship in Wilmette, with the help of the National Spiritual Assembly of the United States of America.

MM: What themes do your paintings embody and explore?

SC: I believe that viewers of my work can recognize and judge this better than I. Above all, I seek to enjoy what I do, and as I do, I find a connection with the chosen subject and with my own vision as an artist. I hope that my work communicates a sense of peace to its viewers.

MM: What would you say is the goal of your art?

SC: I am not looking to change the world with my paintings, but I hope to make the world around me a more beautiful and promising place. I believe that a big part of my mission in this life is to paint, and that an essential part of my identity is expressed through painting.