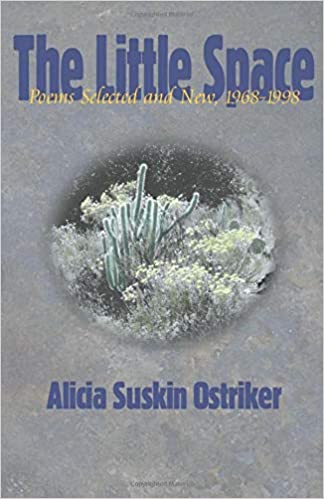 How One Jewish Woman Poet Remade the Wor(l)d:

In 1992, when I was living in Israel, I had a chance encounter with American poet Alicia Ostriker. I couldn’t make it to her reading in Jerusalem, but she turned up at another literary event I did attend: an all-night Sufi poetry reading beneath the stars in the courtyard of an Arab home on the outskirts of Nazareth. I sat cross-legged beside Ostriker on the patio as our host, dressed in flowing white robes and kafiyyeh, recited the words of the masters and, as dawn approached, some verses of his own creation. During one of the pauses in the recitation, as we guests partook of the lavish spread laid out by the host’s family, I had a chance to chat with Ostriker, but no time for the questions I would have liked to ask. How had she, a Jewish woman poet, managed to find a voice within a religious tradition that was so clearly patriarchal? How had she succeeded in making that voice heard in a world that was so overwhelmingly secular.

My questions would have to wait until years later when I studied with Ed Ochester in the Bennington Writing Seminars. As editor of the Pitt Poetry Series, Ed had worked closely with Ostriker and knew her work well. When I told him about my encounter with Ostriker, he suggested I look to the poetry for my answers. I decided to start with The Little Space: New and Selected Poems, 1968-1998. After I had absorbed the 30 years of work included in this remarkable volume, I began to see that as early as 1989, in A Green Age, Ostriker had begun to work out how she could remain true to herself as a Jewish woman poet, even as she was, to use her own metaphor, “dancing at the devil’s party.”

In this volume, a new voice begins to emerge and, with it, a fresh language:

More and more alive —
What then? As I grow older
I love it less, the evil seems denser,

More strangely skewed,
My world nastier and myself weaker.
Still I keep my original loyalty,

My memory — a child on a busy
Sidewalk looking around and thinking
Beautiful dirty city, beautiful planet

I have my task,
What matter if I can
Never accomplish it.
(“To Love Is”)

It is by engaging in the Talmudic tradition of asking questions and by retelling Biblical stories so as to center the Jewish women who figure so marginally in them — by making her own midrash — that Ostriker begins to find her voice. There is always a new tale to tell, or a new way of telling an old tale. In “The Bride,” Ostriker tells of Jerusalem’s woe through the metaphor of the stray cats that roam the city and form their own ‘secret government.’ One cat especially is at the center of the story: “The cat of dire memory, whose heart,/ The size of an olive, is heavier/ Than an iron cannonball./ Heavy because so angry,/ So angry.” To the question of the historical grief of the Jews, Ostriker can find no answer, even as there is no answer to the question of who or what God is. What is being made — the poem, the midrash — is being made from anguished doubt, from the chronic uncertainty that Ostriker identifies as the condition of the Jewish woman poet.

It is precisely this condition that lends power to a long poem entitled “A Meditation in Seven Days.” In response to a saying common among Jews — If your mother is a Jew, then you are a Jew — in the first poem of the sequence, Ostriker asks the question:

Why the chain of this nation matrilineal
When the Holy One, the One
Who creates heaven and earth from formless void
Is utterly, violently masculine....
(i, “A Meditation in Seven Days”)

What answer can be found comes, once again, from making midrash, specifically by retelling the Biblical story of Hagar and Sarah. Ostriker writes:

The lines of another story, inscribed
And reinscribed like an endless chain

A proud old woman, her face desert-bitten
Has named her son: laughter

In the hot sand, along with her son Ishmael
They nearly die of thirst, God pities them

But among us each son and daughter
is a child of Sarah, whom God made to laugh

My mother is a Jew, I am a Jew
Does it teach me enough

In memory
A tangle of sandy footprints.
(iii, “A Meditation in Seven Days”)

Hagar may have been driven out of the tribes of Israel, but Sarah, the “legitimate wife/ Woman of power,” is the ancestor of every Jewish son and daughter. And so the saying with which the poem begins is justified: all Jews trace their lineage to exiled Hagar’s laughter, to her delight in “bodily pleasure,” as well as to Sarah’s legitimacy and power. If the Jewish man is the “vessel of memory,” as Ostriker asserts in the first poem in the sequence, then what, she asks in the second poem, does woman contain, “Of what is she a vessel?” Her answer is, once again, to ask questions and to make midrash. Is Ashtoreth, the moon Goddess of the Phoenicians, a goddess worshipped by “Solomon’s foreign wives, and the Canaanite daughters” — “is she too the vessel of memory”? And so she begins the fourth poem of the sequence with “Here is another story...” and proceeds to tell the story of the return of the Jewish people to the land of Israel:

The young women, with their serious eyes
Their lace collars and cameo brooches

Are the partners of these serious young men
Who stand shaven, who have combed their hair smoothly

They are writing pamphlets together, which describe
In many little stitches the word shalom

The plough and the pruninghook Isaiah promised
Eighty generations

Here in their eyes the light of justice from Sinai
And the light of pure reason from Europe
(iv, “A Meditation in Seven Days”)

At the heart of the Jewish state and the Torah, as poem (vi) points out, stands “the bride/ the radiant Sabbath, the lady we share with God/ Our mother’s palms like branches lifted in prayer/ Lead our rejoicing voices....” There are no easy answers. The Jewish woman poet continues to wander in a desert of uneasy contradictions. The sequence moves towards lamentation as Ostriker considers the exile of the poet from a religious tradition in which she cannot find a place. But in the end, lamentation leads to resolve: though she has not yet found her place, the Jewish woman poet will not stop looking for it. She writes:

And in my sleep, in my twentieth century bed
It’s that whisper I hear, go away,

Don’t touch, so that I ask
of what am I the vessel

Fearful, I see my hand is on the latch
I am the woman, and about to enter.
(vii, “A Meditation in Seven Days”)

In her 1996 volume of poems, A Crack in Everything, Ostriker continues to explore the question of woman’s place in the Jewish tradition. Now, as “Middle-Aged Woman at a Pond” suggests, she has achieved some measure of peace with the chronic uncertainty that plagues her as a Jewish woman poet who finds no place for herself in the world of her ancestors: “Let my question stand unsolved/ Like trees around a pond. Water’s cold lick/ Is a response. I swim across the ring of it.” As Ostriker asserts in “The Book of Life,” the goddess of wisdom — and here she invokes Proverbs — is “a tree of life to them that lay hold of her/ For wisdom is better than rubies.” “The poem asks and answers its own question:

But to whom should we say
Inscribe me in the book of life.

To whom if not each other
To whom if not our damaged children
To whom if not our piteous ancestors
To whom if not the ugly forms
We have created,
The forms we wish to coax from the clay of non-existence
However persistent the voice
That rasps hopeless, that claims
Your fault, your fault —
As if outside the synagogue we stood
On holier ground in a perennial garden
Jews just like ourselves have just begun to plant.

In her substantial and impressive oeuvre, Ostriker shows the Jewish woman poet a way out of the wilderness, a way to find in the condition of exile and the feelings of marginality it generates, a vibrant source of art — an art generated by questions and by challenges to the status quo, an art dedicated to seeing with new eyes, to singing new songs, and to telling new stories. Ostriker’s art is committed to making midrash because “truth” changes over time, is progressively understood, is interpreted afresh by each new generation in light of the social realities of the time. And so it is, Ostriker tells us, that the Jewish woman poet must find a way to make of the “little space” that is her time on earth a world large enough for her to live in comfortably and explore joyfully.