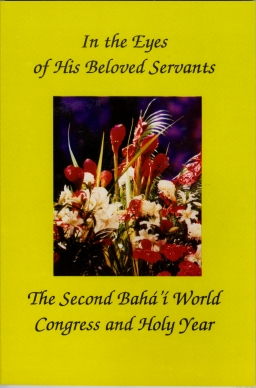 In the Eyes of His Beloved Servants: The Story Behind the Stories

During this centenary year of ‘Abdu’l-Bahá’s passing, I found myself reminiscing about another landmark year in the life of the Bahá’í community: 1992, the holy year, during which Bahá’ís from every corner of the earth gathered in New York City — the city that ‘Abdu’l-Bahá designated as “the City of the Covenant” — to commemorate at the Second Bahá’í World Congress the hundredth anniversary of Bahá’u’lláh’s Ascension and the hundredth anniversary of the will and testament in which He appointed ‘Abdu’l-Bahá as His successor.

I registered for the World Congress in 1991. I was excited to be among the 28,000 Bahá’ís from around the world who would gather in my home city of New York. I understood that there would be lots of video footage and photographs taken, but I felt something more was needed to document this important event.

I couldn’t get out of my mind two verses from the song “Queen of Carmel” — “God will sail His Arc on thee / As mentioned in the Book of Names.” I wrote to the Bahá’í International Community, which was in charge of planning and coordinating the congress, to ask if a ‘Book of Names’ containing the signatures of all the attendees could be created. The committee wrote back that it would be too difficult logistically. I decided to give up the idea.

Later, during the congress, the Bahá’í National Center of the United States set up on its electronic bulletin board system (this was the early days of the Internet) a board where attendees could post their stories about the congress. A fresh inspiration came to me: I would bring these accounts together and make a book!

My goal became to gather and edit all the experiences, stories, and reflections I could find. I pitched the idea of the book to a number of Bahá’í publishers. None of them accepted my proposal, though an editor at George Ronald, Wendi Momen, sent me what was possibly the most beautifully crafted and uplifting rejection letter ever written. I was deeply moved by the care she took in addressing me, and that letter served as encouragement for me to keep going. The rejections were disheartening, but they made me realize that I was the one who had been the one chosen for this job. I decided to publish the book myself.

In the classified section of the American Bahá’í and several other Bahá’í publications, I asked for stories about people’s experiences at the World Congress. I wrote to various National Spiritual Assemblies as well. Before long, I saw that I had struck a chord. My mailbox was flooded with responses! I received countless letters, some from the most surprising places. Turkmenistan? How did she find out I was doing this? Everybody who wrote to me expressed their gratitude that I had taken on this project. My call for people’s stories about the Second Bahá’í World Congress went viral before ‘going viral’ was a meme.

My next challenge was how to bring together all these submissions in a coherent and organized fashion. As the collection of reflections and vignettes grew, I was able to categorize them by theme, and these categories became the chapters of the book. “Setting, Atmosphere, Spirit” was for submissions that evoked the feeling of what attending the congress was like. “Getting There and Back” was for people’s adventures while getting to the congress or returning home. “World Congress Diaries” included personal journal-like accounts of their experiences. “Dreams and Visions” contained the experiences of those who had dreams, inspirations, or visions related to the congress.

It is difficult for me to single out any one chapter I enjoyed working on more than the others, but I felt and continue to feel that the accounts in “Behind the Scenes” were the most amazing. Not all submissions were about the congress, however. “Centenary of Bahá’u’lláh’s Ascension” covered the commemoration at the Bahá’í World Centre. “Global Reverberations” contained accounts of events that occurred during the Holy Year, such as: a personal first-hand Bahá’í perspective of the Rodney King riots in Los Angeles; the 1992 Earth Summit as reported by the Bahá’í International Community; a non-Russian working at the Russian Bahá’í Publishing and Distribution Service in Moscow; and life as the only African-American woman in Turkmenistan.

The title of the book therefore became In the Eyes of His Beloved Servants: The Second Bahá’í World Congress and Holy Year.

The book still needed a front and back cover. The Bahá’í International Community office in New York City indulged my request to sift through their large collection of photographs from the congress and order copies of the photographs I wanted. In retrospect, if given the opportunity to do anything differently, I would have included more photographs. I underestimated people’s desire to see pictures.

For the front cover, I chose a photograph of some of the flowers sent to the congress by the Bahá’ís of Iran, who could not attend in person. On the first day of the congress, a seemingly endless procession of flower baskets were delivered to the stage of the Javits Center. They became emblematic of the spirit of the occasion. Tears of compassion streamed from eyes as those who attended reflected on the suffering of the Bahá’ís in Iran and their inability to be present. A handful of Bahá’ís from Iran and other sensitive countries did manage to attend; they were the ones whose countries were not listed on their name badges.

The other photograph that I felt was emblematic of the event was the one of Bahá’ís in the traditional attire of their culture and countries; truly, it was a ‘flowers of one garden’ type of celebration that fully embodied the Bahá’í principle of ‘unity in diversity.’ Walking together, these Bahá’ís made up the Parade of Nations, an event which took place on the second day of the congress. This photo became the back cover of the book. 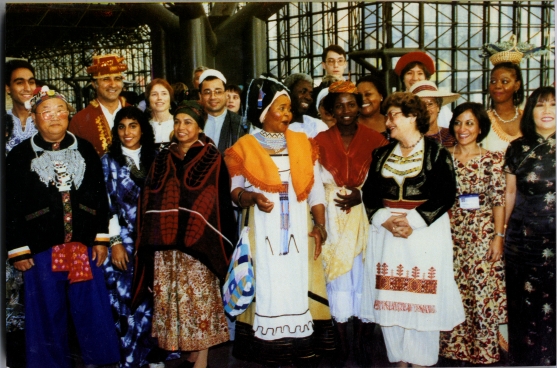 Since it was the Universal House of Justice that decided there should be a Second Bahá’í World Congress, I realized I needed to mention that institution in some way in the book. The book also needed an introduction and possibly an epilogue that would provide some type of overview of the congress. For the introduction I used the 26 November 1992 letter of the Universal House of Justice that was read aloud via satellite link to the Second Bahá’í World Congress and to nine satellite congress gatherings around the world, simultaneously and live. The message eloquently recounted the progression and development of the Bahá’í community over the last one hundred years in contrast to the decline in the condition of humankind around the world. I included a few more accounts to round out the introduction chapter, such as the live conversation in which each of the nine satellite conferences had a spokesperson recite a message of greeting to New York City; and a message to the congress written by the Bahá’ís of Iran.

In its 3 December 1992 letter, the Universal House of Justice expressed its joy and gratitude of the success of the congress. I decided that this letter was perfectly suited to serve as the epilogue to the book.

In 1994, I self-published In the Eyes of His Beloved Servants. I printed 2,500 books but sold only about 1,500 to various Bahá’í distribution centers, bookstores and individuals. Over the years, I have given away about 700 books. The book did not sell as well as I anticipated; nevertheless, Bahá’ís who knew the book world told me that as far as Bahá’í books go, this one was a best seller. I still have about 250 or 300 books left. I admit that the book wasn’t the most professionally produced one by a longshot, but since my goal was to preserve these accounts for posterity, I felt my objective was achieved.

I believe that such once-in-a-generation commemorative events serve to remind us of the tangible and spiritual impact of the Bahá’í revelation as it galvanizes and quickens the world, moving it gradually closer to an enduring peace based on trust and harmony. As for myself, I had been a Bahá’í for only two years when I attended the Second Bahá’í World Congress. Through my participation, I glimpsed the reality of this revelation. Without doubt, the event solidified my conviction and faith.

Since 1992, the trials and tribulations of the peoples of the world have multiplied and intensified. Albert Einstein once said, “We cannot solve our problems with the same thinking that we used when we created them.” What new kind of thinking is necessary?

In its 26 November 1992 letter, the Universal House of Justice wrote about what it considered to be “a failed understanding as to the purpose of God for humankind,” and that “the revelation of Bahá’u’lláh sheds new light” on this purpose. “[H]uman beings have been created to carry forward an ever-advancing civilization.” “Let those seriously concerned about the state of the world . . . realize that the storms battering at the foundations of society will not be stilled unless and until spiritual principles are actively engaged in the search for solutions to social problems.” Toward that end, the Universal House of Justice called upon Bahá’ís all around the world to demonstrate, “by word and example,” that the teachings they live by “do not ignore, nor . . . attempt to suppress the diversity of ethnical origins, of climate, of history, of language and tradition, of thought and habit, that differentiate the peoples and nations of the world.” The call is to embrace a “wider loyalty,” “a larger aspiration than any that has animated the human race.” “It insists upon the subordination of national impulses and interests to the imperative claims of a unified world.” “It repudiates excessive centralization on one hand, and disclaims all attempts at uniformity on the other.” “Its watchword is unity in diversity.”

As I meditate on the current year devoted to the commemoration of ‘Abdu’l-Bahá’s passing, I am reminded that the ideals described in the 1992 letter of the Universal House of Justice were lived by ‘Abdu’l-Bahá — the Master and Perfect Exemplar — during each moment of His life.

J. Michael Kafes is the webmaster and assistant editor of e*lix*ir.