The Munich Girl: A Novel of the Legacies that Outlast War

Anna Dahlberg grew up eating dinner under her father’s war-trophy portrait of Eva Braun. Fifty years after the war, she discovers a secret: that her mother and Hitler’s mistress were friends.

The secret surfaces with a mysterious monogrammed handkerchief, and a man, Hannes Ritter, whose Third Reich family history is entwined with Anna’s. Plunged into the world of the “ordinary” Munich girl who was her mother’s confidante — and a tyrant’s lover — Anna finds her every belief about right and wrong challenged.

With Hannes’s help, Anna retraces the path of the two women, who met as teenagers, who shared a friendship that spanned the years that Eva Braun was Hitler’s mistress, yet who never knew that the men they loved had opposing ambitions. Eva’s story reveals that she never joined the Nazi party, that she had Jewish friends, and that she was credited at the Nuremberg Trials with saving 35,000 Allied lives.

As Anna’s journey leads back through the treacherous years in wartime Germany, it uncovers long-buried secrets and unknown reaches of her heart to reveal the enduring power of love in the legacies that always outlast war.

For my extra day of freedom, I planned to linger over breakfast at a table with a sunny view of the mountains. But the dining room was a frenetic symphony of clinking and clattering when I arrived and the maitre d’ stuck me in a dark corner.

I had just poured my coffee when a young male voice shrilled, “Fräulein Peggy Adler?” from the entrance.

I turned as he reached my table in a handful of long strides. He wore the stiff uniform of Hitler’s Leibstandarte: dark tunic, breeches, tall boots, and rounded helmet. All that was missing was the rifle customarily slung over the shoulder.

Terror struck so hard, I couldn’t speak — not even to ask where. Especially not that. It seemed incriminating. At last, I stammered, “I-I-”

“You have been requested for an interview,” he said.

What kind of interview? I still couldn’t find words to ask. Should I get my stenographer’s pad? Or was this about questioning me?

“We have a car waiting outside.” His tone was threaded with impatience, as though I were already taking too long, being too slow to understand. I’m surprised he didn’t check his watch, tap his foot. His face had a youthful softness. He was perhaps 19 or 20. I thought of my brother, Peter.

I noticed a waiter at the neighboring table and glanced at my unfinished cup of coffee, as though it might offer some possibility of reprieve — he would insist I stay, since I hadn’t finished.

He also seemed uneasy around the guard as he said, “No trouble, Madam. We will keep your table for you.”

But would I return to it?

Then I remembered my co-workers, and Erich, and blanched with fear as cold as the sweat that rose instantly on my neck. Hadn’t I been careful enough, yesterday? Had I said too much? Had someone besides Eva been listening, or had my cohorts from the Foreign Office somehow been found out?

My mind raced to the worst of all possibilities — they’d been apprehended. I refused to let that thought take root, claimed my mind back from it the way I try to rescue my breath from panic each night in the air-raid shelter back in Berlin.

Appear unfazed and cooperative. I’d heard this tactic from Erich and others in the Resistance. If stopped by the Gestapo, or called in for any reason, seem slightly surprised, untroubled, and entirely willing to comply.

I reached to gather my things. I had only my purse, and the book I’d brought along. “Will we be going far?” I found courage to ask.

“It is right nearby.”

When we reached the car, his brisk movements included a snap of his heels as he opened the door for me. Clearly, he wasn’t going to manhandle me like a suspected criminal. Not yet.

I clambered into the back, toward the middle, and closer, of the two bench-like seats. The mammoth Mercedes had as many huge tires as a delivery truck. Its convertible top was down, and bright sun blinded my eyes.

The young uniform joined the driver in front. The car exited the Platterhof parking lot, made a hard left, and rolled down a sharp incline, though only a short distance.

Goering’s house was somewhere off to the right, hidden by trees. I’d learned recently that beneath us was a burgeoning network of tunnels and bunkers under construction, a subterranean complex that those who dwelt above ground might not even know was there. Perhaps it would open up suddenly and swallow us all.

The car blocked the narrow road when it stopped at a guardhouse barely big enough for one person to stand inside. Behind it was the Hotel Türkenhof where Aunt Paula and I had once stayed. It looked to be in use as barracks of some kind. Is that where they were taking me? The uniform turned and said, “Your papers, please.”

I had them ready in anticipation of this, though I’d already gone through all the rigmarole of admission to the Führer Zone two days ago.

He took them, got out, and strode to the guard shack.

I’d been taken in for questioning once before, after I’d accompanied Jewish children to England as an escort with the Kindertransport. A petty Nazi bureaucrat summoned me because of my dual citizenship. I’d dressed conservatively in a simple cotton print skirt that hinted at a dirndl’s lines, and a borrowed white blouse tied loosely at the throat so the top half of my décolletage was visible, while the rest remained virtuously concealed.

During my inquisitor’s first burst of questions, I’d offered simple answers with a demeanor of complicit meekness. Finally, I’d evoked tears by imagining the inevitable fate of that Jewish child I’d seen pulled back through the train window into her father’s arms. “Can’t you imagine how thankful I am that Germany is my birthplace?” I nearly shouted at him. “That my mother is so faithful?”

More advice from those in the Resistance: act indignant, insulted even, at the very dishonor of being suspected of disloyalty.

“There are many spies,” he said. “Dual citizenship makes an excellent cover.”

It does, indeed, my thoughts concurred.

“How can you even suggest such disgrace?” I tried to sound hurt. “When my British blood is disgrace enough, for me?”

Then I’d covered my face in the refuge — and strategy — of sobs. It had been over-dramatic, but I wanted to leave no doubt in his mind. I used my best high German for these impassioned declarations. Once I saw he was softening, I lapsed into the Schwäbisch dialect I’d detected in his own speech, thanking God for my ear for nuance and language.

The inquisitor turned almost paternal, even invited me for coffee. I’d had to pretend disappointment, say I was expected home to help Mutti.

“You are the kind of maid who will assure the Fatherland’s triumph!” he’d avowed, like the final line of some Wagnerian drama.

“Whatever you do, use the language of the current view, and mold it to your needs,” Erich had advised me before I’d accompanied those Jewish children to safety.

It was the only way to deal with these fools. These very dangerous fools. 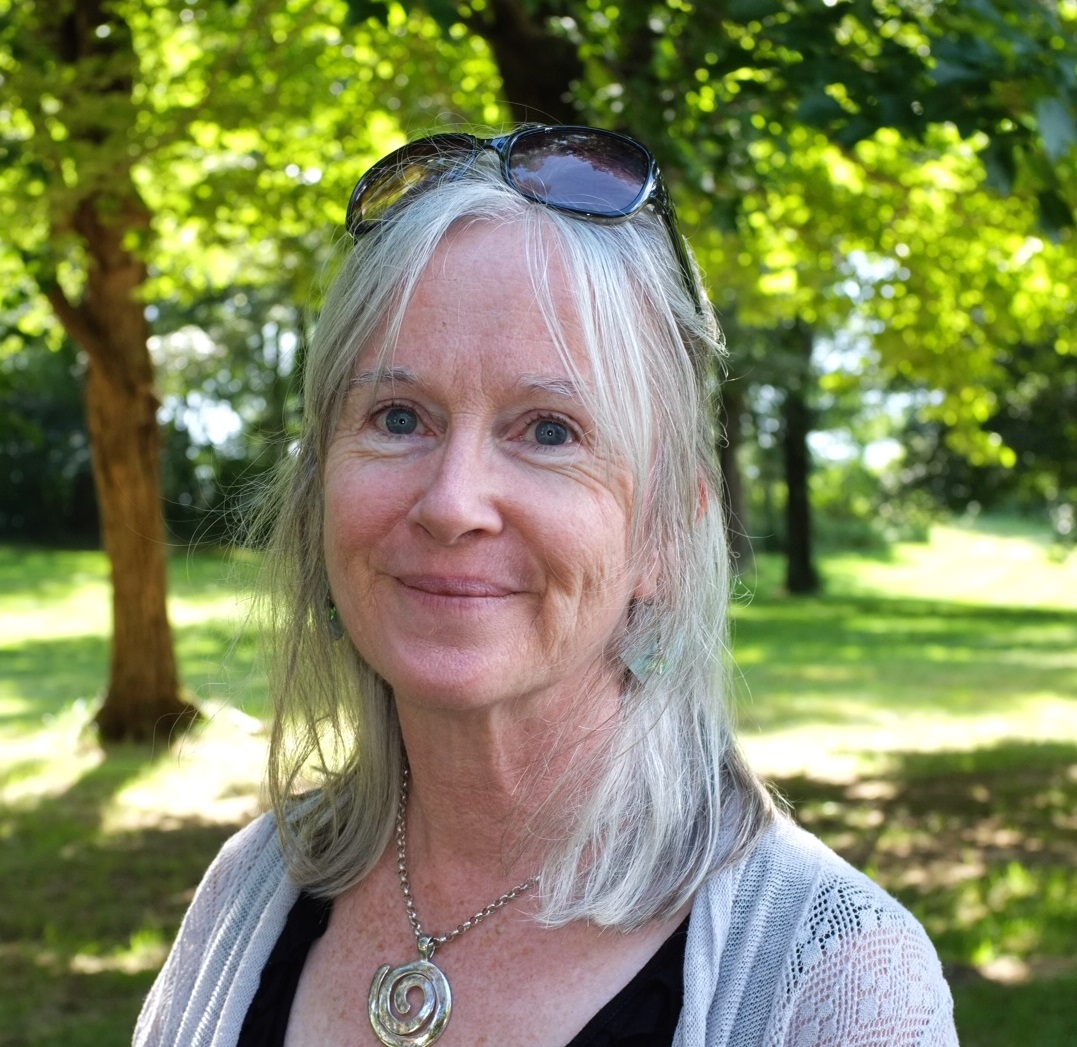 Artist Statement:   I seek to uncover the noblest possibilities in the human heart and to discover how history, culture, spirituality, and the natural world shape the journey of the human family. The vision of the future that the Writings of Bahá’u’lláh evoke, is one of prosperity and hope, so as a writer of stories, I am alert to every evidence of these I can find, even, perhaps especially, when circumstances may appear dark or chaotic.

More than any other kind of writing I’ve done, book-length fiction requires an absorption that leads me to what must be realized in a story. For me, this is an utterly spiritual experience — to weave together mysterious unseen threads into a reality that the emotions and spirit can recognize as true. To encounter truth in this way is an experience that transcends this earthly life. Bio:   Phyllis Edgerly Ring has worked as a writer, editor, nurse, tour guide, program director at a Bahá’í conference center, English teacher in China, and instructor for the Long Ridge Writer’s Group. Her articles and essays have appeared in publications such as The Christian Science Monitor, Ms., and Writer’s Digest. She is the author of two novels, Snow Fence Road and The Munich Girl, and of the inspirational nonfiction book, Life at First Sight: Finding the Divine in the Details. She lives in New Hampshire.