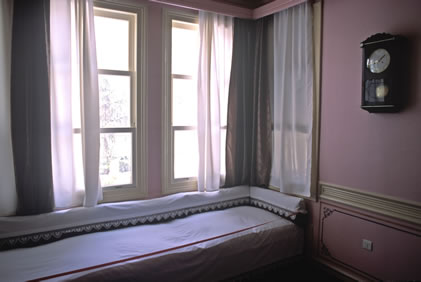 Two years ago my parents and I traveled to Edirne, Turkey to visit Bahá’u’lláh’s house. When we realized that the day we would arrive in Turkey coincided with Bahá’u’lláh’s birth, we became very excited. When we arrived in Istanbul, it was very late at night and so cold. We felt very tired so went right to bed since we had to get up early the next morning. That night, I couldn’t sleep a wink, thinking about our visit to the holy house.

It was six in the morning when we caught the bus that would take us to the village where the house was located. The countryside we passed on our way was very beautiful. When we arrived in Edirne, we got off the bus and began the ten minute walk to Bahá’u’lláh’s house. The streets of the village were covered with stones, and as I walked, it occurred to me that Bahá’u’lláh’s own feet would have touched these same stones. I could hardly believe I was walking along the same streets where Bahá’u’lláh’ had once walked.

As we approached the holy house, we began to pray. By the time we arrived at the house, my heart was pounding. I felt delirious. The house was so white and pure and beautiful. The roses in the yard seemed to be guiding us to the entrance of the house. When we entered the house, we found ourselves in a small and simple living room. Next to the door were a few steps that would lead us to the second floor, which had two rooms.

Inside one of the rooms there was a shiny wooden box. It was a mysterious looking box and attracted everyone’s attention. We were curious to know what was inside of it. So we asked the custodian who told us that the box held some of Bahá’u’lláh’s clothes and a book in His own handwriting. Immediately, we began to pray, and, for some time, I lost myself in the peace and stillness of that place.

The pilgrimage to Istanbul had a considerable influence on my life. When I was in Bahá’u’lláh’s house, I asked myself whether I had done what He wanted me to do. I asked myself if I had been a truly useful person in this world. That day, as I sat praying in that holy house, the purpose of my life changed: I decided to devote myself to serving all people, irrespective of their religion or culture. I am very thankful to have been able to make a pilgrimage to that holy house. My visit there changed my heart and set me on the path I will follow for the rest of my life.