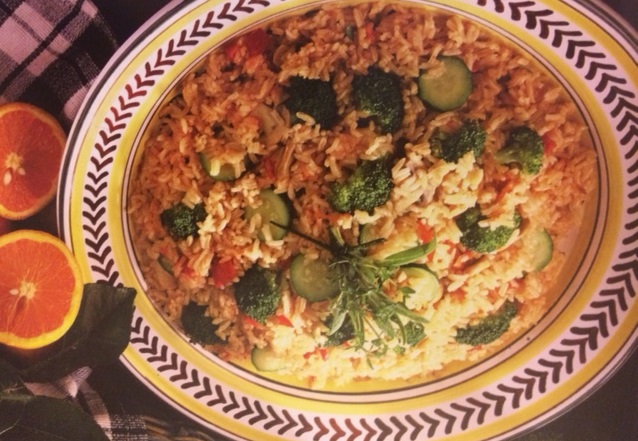 I have cooked many dishes with my sister-in-law Evette. Together we have taught ourselves to cook. We would often start our cooking project for the night by searching the internet. Our first dish was rice, which was more challenging than you might think. Our next dish was dahl. Dahl is an Indian stew that is an everyday part of Indian cuisine. It is made from lentils and coconut milk. You would think that would be simple, but our first batch was inedible. But sometimes, to our great surprise, a dish we cooked for the first time would turn out surprisingly well. When it didn’t, we reminded ourselves that it was by ruining the easiest dishes that we would learn how to become good cooks. All we needed was practice.

The first time Evette and I served our rice, no one would eat it. It was hopelessly mushy and watery. The more we tried to make the water evaporate, the mushier it got. Evette kept saying, “Neda, we need to keep it on a higher flame so that the water can evaporate.” And I just kept laughing, because I saw the rice burning on the bottom of the pan. Evette chastised me, saying, “Neda stop laughing and come help!” But I could not stop laughing. And in the end, Evette was laughing too. That night, my brothers and my mother ate bread with a stew my mother had prepared from the day before. No one touched the rice, and I do not blame them. On that night, we almost decided to give up and never put another pot on the flame, but we just could not stay away from the kitchen.

When Evette was pregnant, she would have midnight cravings. She would be in the next room watching a movie with my brother, Hootan, and I would be in my room watching another movie. Then I would hear a persistent knock on my door. It was Evette. She was starving, she said, and craving something spicy. We would go to the kitchen and try to figure out what we could manage to cook at three in the morning. Inevitably, we would on decide on Maggie, a ready-made noodle with a spice packet in it. Making Maggie was as simple as it gets. All you have to do is boil water, break the noodles into the water, add the spice packet and wait for two minutes. Still, Evette loved the way I made Maggie, because I would add extra chili powder to it to make it spicier.

Evette would sit on the dining chair and wait for the Maggie to be ready, then we would eat together and laugh at how silly we were to be eating at three in the morning. Evette would always say, “Once the baby comes, we will not be able to live like this! We cannot be up all night. Our lives will fall into a routine once the baby is born.” We would talk about all the things we would do when the baby came, the games we would play, how we would take her to the playground and, when she was older, shopping for beautiful clothes. When we talked, we often lost track of time until, to our great surprise, we would see the sun rise, so we would go to our separate rooms and sleep.

One day, Evette invited some of her friends from work to our house for lunch. She told me she wanted to make biryani for them. Biryani is another well-known Indian dish, filled with spices and amazing fragrances. So we searched for a recipe on the internet then wrote down all the ingredients. But as we set out to cook the dish, we had a crisis in confidence: if we could not make rice, which is so simple, how we could make this complicated dish? So, when the maid came to clean the house and wash the dishes, we asked her if she could help us make the biryani. She agreed, and asked us to get the necessary ingredients.

The maid then ground the onions, tomatoes, garlic, ginger, coriander, and mint leaves. Next she fried the paste in a pan with the curd and added the spices. She told us to put the chicken in a pressure cooker, and cook it with some turmeric powder and chopped onions. After the chicken was cooked, we added it to the fried paste and cooked it a little more. She then boiled some water, washed the long grain basmati rice and put it in the boiling water for ten minutes. When the rice was half cooked, she took a big pot and laid one layer of rice under one layer of the chicken mixture and on and on until the pot was full. She put the pot on the stove and told us to keep an eye on it. It would be ready in three hours, she said, and then she left.

After three hours passed, Evette and I opened the lid of the pot and the amazing fragrance took over the whole house. We served the biryani to the guests and they loved it. Now Evette and I have become good cooks, Evette more so than me. The lesson we learned is that, if you put your heart and soul into mastering something, you will succeed — with a lot of practice! If we had given up the day we failed at making rice, today I would not be the one that everyone asks to make the biryani for every party. These days Evette calls me the “Biryani Queen,” and I say to her, “If I am the queen, then you are the king of buryani!” We work well together, Evette and me, and I expect we will be cooking together for many years to come.