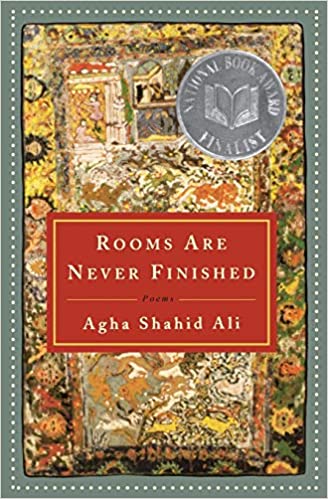 I have long been intrigued by the poetry of Agha Shahid Ali because of its rootedness, in both its forms and postures, in the Arabic tradition of poetry, and because of its implicit connection thereby with the world of the Quran. In his 2001 collection, Rooms Are Never Finished, which was a finalist for the National Book Award that year, Ali’s craft is at its height.

The book opens with “In Lenox Hill,” a stand-alone poem that serves as a frame for the collection as a whole. In this prefatory poem, Ali locates himself in a hospital in Massachusetts, where his mother has just undergone brain surgery. He establishes his theme: his grief over the imminent loss of his mother, a grief which is a microcosm for his despair in response to the fraught condition of his homeland, Kashmir. The death of Ali’s mother will serve as an occasion for more universal reflections on Kashmiri politics, on death itself, and on the presence/absence of the Beloved (God), who always “leaves us behind to die.”

The first section of the collection is entitled “From Amherst to Kashmir” and details the journey of the body of Ali’s mother from the U.S. to Kashmir for burial. It is in this section and in the second one, which shares the title of the book, that the poetic voice and vision readers have come to associate with Ali’s work are most evident, a voice and vision rooted in Arabic poetry, the Quran, and the Upanishads, as well as in a deep communion with the spirit of Kashmir. Here, Ali brings together a diverse selection of lyrics, most of which address the questions raised by the poet as he confronts the inevitability of death.

The twelve poems in this second section are richly adorned with allusions to myth, to scripture, to popular culture, and to a host of fellow poets and their poems. The richness that results is one of the most compelling features of Ali’s poetry. Ali includes a translation of a well-known ode by Faiz Ahmed Faiz entitled “Memory.” And more than once in the course of the elegy, he draws on a verse or incident from the Quran as his point of departure, as in “Zainab’s Lament at Damascus” and poems #4 and #8, the latter of which begins with an epigraph from the shahadah — the Muslim testimony of faith. Lines from Faiz, from Edward Gibbon, from the ragas sung by Beghum Aktar, and from the Sufi poet Ghalib pepper the verse, making it a remarkably rich food that must be consumed slowly and in small portions. Indeed, readers who are not versed in non-western literary and scriptural traditions, may, on first read through, need to draw on reference materials in order to probe the poems of this section.

Ali offers his translation of Mahmoud Darwish’s iconic poem “Eleven Stars Over Andalusia” in the third section of the book. It is not surprising that Ali chose to translate Darwish, a Palestinian poet whose work offers a model for the marriage of private and public voices in poetry. Like Ali, Darwish grew up in a land fraught with political unrest. For Darwish, social violence was a fact of daily life. In “Eleven Stars Over Andalusia,” Darwish uses the fallen Andalusia as a metaphor for his vanquished Palestine. His tone is pessimistic, even despairing, as is Ali’s when he writes of the rage and hopelessness that are the fruits of the Kashmiri conflict. A lament for a seemingly irresolvable political dispute as well as an elegy for a dying society, Darwish’s poem provides a potent commentary on as well as an aesthetic frame for Ali’s own poems in this volume.

The final section of the volume, “I Dream I am at the Ghat of the Only World,” consists of an elegy for Ali’s mother and for poet James Merrrill. Their intensely personal tone makes these final poems especially powerful. In this section, Ali addresses his mentor, the late James Merrill, to speak of the loss of his mother as well as of his faith. Merrill answers Ali, writing in the same upper cases letters in which he recorded, in “The Changing Light at Sandover,” the conversations he claimed to have had with the dead via the ouija board. Merrill’s imagined response to Ali’s angst ends the poem: “SHAHID, HUSH. THIS IS ME, JAMES. THE LOVED ONE ALWAYS LEAVES.”

Throughout this moving collection of poems, Ali is unafraid to address religious themes directly and to speak to or of God, who is variously described as the Beloved, “the final assassin,” “a Moth,” or, simply, God; and it is in the tension between these conflicting notions of the divine that much of the interest of the volume lies. This is a poetry in which readers are privy to a very intimate conversation with God, one that moves from rage, grief, and a sense of betrayal, to love, acceptance, and a genuine desire for intimacy. Agha Shahid Ali’s Kashmir is a landscape of devastation and of hope; and in Rooms Are Never Finished, we have the privilege of journeying with Ali as he traverses that landscape in search of his own salvation.