The trees of the eastern forest,
ash, oak, sugar maple,
bend with the wind,
their leaves catch the Gregorian chants
from the morning’s mass.

Incense mingles with bright air
and the simmering sap
steaming on the stove.

He likes this time,
when he can lie among the leaves,
rehearsing his lessons, the cities and prophets
of India, Persia — the East.

He can hear the bells pealing through the valley,
ringing out notes he does not know yet.

The song bounces off rugged rocks,
and sends leaves flying
around the stone tower
where the bells live.

Rising now,
feet clambering over roots and stones,
heart chasing the leaves,
he runs to the tower
where the ladder stands.

White pine, strong and straight
with rungs of sweet birch,
a Pentecost calls him to climb above his texts
and learn the music of sitar, pipa, oud.

My bamboo rake scratches the cement,
landing place for the fallen maple leaves,
gathers the strays into a weightless cone of russet.

A rock gets swept in among the leaves.
I toss it clattering against the ivy covered wall,
stone against stone.

I see a new bloom crowning the aloe cactus,
And a single white gardenia peeks from waxy leaves.

Yes, we will go this winter to Barcelona,
walk the streets of the Gothic quarter
weightless and bold,
We will cross into another weather,
eat oranges, burn with russet flames.

They pass in front of me,
the one
seeking a sign
from the other
of being seen.

The feet remember the no-shoes time,
walking on the hard red earth,
Earth of his grandmother,
of her grandmother,
She of a different place,
a different crossing,
And she who sang
“Praise the Lord of All Hope!”

The feet remember the shoes’ time.
Marching on the hard grey streets.
Streets of his father,
He of a different time,
He who sang
“We shall overcome!”

The eyes —
He does not see them in the other
as they cross in the street.
His eyes ask
“Do you not see me?” 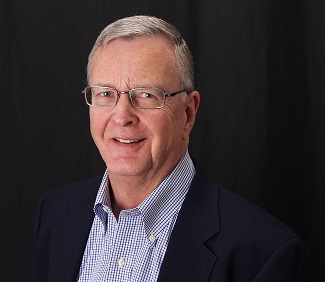 Artist Statement:   In writing poetry, I hope to contribute to God-inspired and gentle, heart-felt social discourse, and to feed and express my artistic spirit. I look for the metaphors linking spiritual and physical reality, and for the subtleties in personal interactions that illuminate spiritual truths.

Bio:   James Andrews is a native Californian who grew up in the San Francisco Bay Area. His parents moved from Chicago, where they had roots in the Polish community. He attained advanced degrees in public administration from Drexel University in Philadelphia and in education from San Jose State. Following a career as a human resources administrator in the public and private sectors, he is now focusing his energy on his first passion — writing poetry. James and his wife, Patricia, live in San Jose, California. Theirs is an international, multi-cultural family, with nieces and nephews around the world.